Jemma Fong, visiting London from Canada where she now lives, was on the same original flight over from Hong Kong to the UK as me, some fifty-two years ago. There is a black and white photo of four of us arriving at London Airport, (which in those days was at Croydon.) Jemma happened to post these pics on f/b, and I recognised myself in them, having had no previous knowledge that we’d been on the same flight. (I should also mention, though in f/b contact, I had not previously met Jemma.) 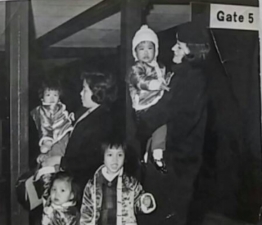 Serena, Sue, Kate, Joanne, Linda Fawcett and her son Matthew
met up with Jemma, her partner Sandy and Sandy’s nephew (also Canadian, now living in London.) I discovered that everyone else attending, had at points in the recent past met Jemma either at a Hong Kong Reunion or in the United States, so if you’ve been to any of the overseas Reunions, you may have met Jemma and her partner Sandy.

We met-up at New World Restaurant in Chinatown for a lunchtime Dim Sum, which is the Chinese equivalent of a Greek Mezze or the Spanish Tapas. Trolleys of Chinese delicacies (savoury and sweet) on little dishes that have been steamed or fried are pushed around the restaurant and diners choose as many or few as they fancy. 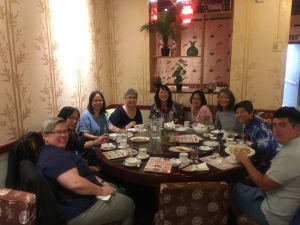 I first went to New World Restaurant, nearly forty years ago, and the dishes were pretty much as I recalled: varied and delicious! Jemma has some rudimentary Mandarin and was able to request certain dishes and provide some translation. This is truly a fabulous way to spend some time together and incredibly cheap, it worked out at £10.80 per head!

We then wandered around to Wardour Street to Bubblewrap for waffle cone ice cream. Bubble waffles, part of the street food scene in Hong Kong, originated as a way to use up broken eggs, which couldn’t be marketed, flour and milk was added to make a batter and these curiosities were born. They are a new trend on the London foodie scene.

Quite sizeable(!) waffles are made in specialist waffle irons, then shaped into a cone, which are then filled with ice cream from a selection of around six flavours with a variety of different toppings. Just as well lunch was light and cheap, as these dessert whoppers are huge and cost from £6.50- £8+ depending how much you indulge your sweet tooth and choose not to stint on your treat!!! We queued for around an hour, but chatting together, the time passed quickly and enjoyably. Since it’s street food, there’s no seating
so we stood in the street consuming these giant ice creams, taking nearly as long to eat them as to queue! (Okay, Kate, around 15-20minutes) 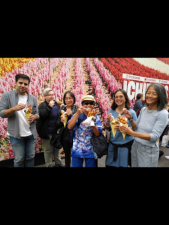 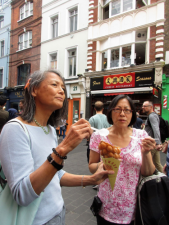 It was a lovely day out, I then headed home, but the others strolled through to Covent Garden and explored, before eventually heading to their respective homes. 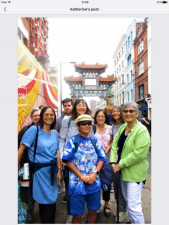 What a really brilliant way to spend some time together, and refresh old friendshipsand make new ones! I’d definitely recommend Dim Sum, if you’ve never tried it.