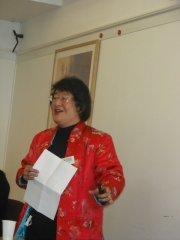 I bet that got you going!

And now it looks like a rating scale for cowardice…

I was found by the police on the doorstep of either 42 or 63 Berwick Street in Hong Kong on about 23 December 1960.  They reckoned I was approximately 2 days old.  My birth was registered by the matron of Po Leung Kuk, an orphanage and refuge for mothers.  My parents always believed that I was eventually in Fanling Babies’ Home.  Sally Rigby’s parents believed, to the contrary, that I was in St Christopher’s.  It irritates me profoundly that I don’t know as none of the paperwork I’ve uncovered so far confirms where I was.  I arrived at LondonAirport (now Heathrow) with 8 other adoptees on 20th December 1962.  My parents had been put in touch with the Rigbys, also from the Wirral (between Chester and Liverpool), and they travelled in my father’s car to collect Sally and me from the airport.  The name on my birth certificate is Lam Ling Chi.  I also had a bracelet with this name on.  I don’t know where the name came from.  I had thought it was my original name but many adoptees were given their names by the director of the children’s home they were in. 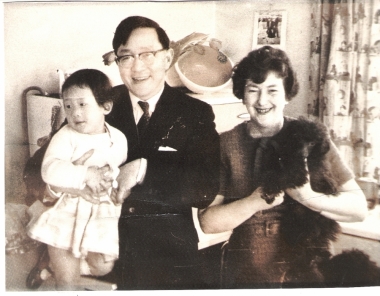 My dad was 2nd generation Chinese, born in Cardiff in 1922.  His parents were so poor, he was adopted by a man called Chin (surname), in exchange for a laundry.  During WW2, he met up again with his birth family in Liverpool.  He married my mum in 1951 in an era when mixed marriages were extremely rare.  They met as lab assistants at Shell’s Stanlow Oil Refinery in Ellesmere Port on the Wirral.  They couldn’t have any children so they adopted me.  They thought “Ling Chi” would be unpronounceable (in Mandarin, it’s Ling Zhi) so I became Claire Ling Chi Chin.

Dad’s blood relatives took an enormous interest in this adoption and were extremely supportive.  Like Dad, they were born here and couldn’t speak Chinese at all.  His sisters, however, had both married Cantonese speaking Chinese men, and they tried to communicate with me.  There were 2 small problems.  One was that I was extremely traumatised and would scream my head off in the presence of men.  Poor Dad couldn’t go anywhere near me for the first couple of days back in Little Sutton village where I grew up.  The second was that I either couldn’t or wouldn’t speak.  A somewhat alarming report on my adoption file assesses me as “extremely under developed”.

My mother died suddenly of a brain haemorrhage when I was 12.  I was never close to the few relatives she had, so imagine my surprise, when playing in the village, some English kids approached me claiming to be my cousins.  The family was rather tight lipped about the whole affair and I’m not really sure how much her side of the family viewed our rather unusual situation.  Mum’s father refused to attend the wedding when she married Dad, so who knows…

Of the 100 or so of us who were adopted by British families, I was pretty unique in having exposure to Chinese relatives and Chinese culture.  But just how Chinese were we really?  Dad and his family were BBCs, British Born Chinese.  The food we ate was what we could cobble together from the village shops and the odd trip to Chinatown in Liverpool for soya sauce.  Supermarkets didn’t exist in the 60s as they do now – at least not on the Wirral.  An English school friend invited me to tea and was delighted to serve me Vesta Chicken Chow Mein.  I’d never heard of it.  It didn’t resemble anything my family had ever encountered.

Even more excruciating was the occasional visit to Chinese restaurants.  My poor father once had to withstand a tirade from a waiter who claimed Dad wasn’t Chinese at all.  “You don’t talk Chinese, you don’t walk Chinese, you don’t even look Chinese.”  Imagine what they made of me, with my English mother.  What’s worse, I actually look Japanese.  When I visited Dad’s younger brother, who’d escaped all this abuse and emigrated to Singapore, I met enormous hostility in Malaysia because I was mistaken for being Japanese.  The conversation went something like:

“How do you know she’s Chinese, then?”

So clearly there are shades of yellow and, in the eyes of “proper Chinese,” I’m patently at the pale end of the scale.  In fact, they call us bananas.  In the light of the controversy over Ashley Cole being accused of being a choc ice, I’ll leave you to ponder that one.

I was determined to counter this by dressing Chinese (you can see I’m still trying) and learning Chinese.  I went to DurhamUniversity and studied Mandarin.  I was supposed to study in China for a year but extensive medical tests led to discovering I was a carrier of Hepatitis B.  It took 18 years before something vile came out of the woodwork relating to my dodgy origins, and this was it.  It meant I had to go to Taiwan instead (China wouldn’t let me in).

There were no direct flights in 1980, so I went via Hong Kong, on my own with food poisoning (don’t ask) and only half my luggage (Cathay Pacific sent the other half to Los Angeles).  Oh, and I’d learned Mandarin, not Cantonese (which is what they speak in Hong Kong).  So I ended up in even more complicated explanations for my inability to communicate in my own tongue.

Which brings me to how I’m perceived by the English.  One of my bolt holes in Hong Kong was an English school friend’s mother.  I arranged to meet her on VictoriaPeak where she lived.  She was shocked when she saw me.  Hence another somewhat surreal but oft encountered conversation:

“But you sounded just like a girl from Liverpool over the phone.”

“I am a girl from Liverpool.”

And that’s what I am.  A Scouser.  What I discovered in Taiwan was that I wasn’t nearly as Chinese as I thought I was.  I’d learned to talk Chinese, even dress Chinese, but, in the end, I couldn’t act Chinese.  It was a huge disappointment to the family of course.  Being the first of my generation to learn Chinese and go back out to the Far East, they expected me to meet and marry someone Chinese.

I came back to Durham speaking far better Chinese and promptly had a nervous breakdown.  I didn’t actually know that I was having one.  Everyone put it down to the Hep B at first but after being tested for everything under the sun including glandular fever, we were all very non-plussed.  Eventually the university psychologist got wind of this from my prof who was worried I was falling asleep in his lectures.  Hence another one of these weird conversations:

“Chinese don’t recognise Depression.  They just get ill instead.”

This was all a mystery to Dad and me given neither of us had indulged in anything so exotic as Depression with a capital “D.”  We both resolutely smiled through our trauma – poor Dad lost his eldest brother, his mother and his wife within a short space of time and claimed he couldn’t remember the 70s at all.  So when I asked him if this assertion still applied to Chinese brought up here, he said the most extraordinary thing:

“You were always more Chinese than I was.”

My 50 shades just got yellower…until I started dating,  I’d had mild interest from a Chinese lad in Taiwan, who being very Chinese or very shy, took so long to declare his intentions that I was due to go home before he’d said anything.  I went out with a batty American from LA who kept telling me to “mellow out” whenever I got ratty and complained that I was too English and two timed me with a local Chinese girl.  Back in Durham, there was a chap from Malaysia called David who was interested but went about it as slowly as the Chinese lad in Taiwan.  And then I met David Martin.  He didn’t give a sausage about how Chinese I was, the Hep B or the nervous breakdown.  Not being Chinese, he didn’t hang around either.  I remembered how my landlady in Taiwan had been treated by her husband and mother-in-law.  I realised that I couldn’t bow and scrape to a Chinese man – which is why I’m not married to one.  I finally recognised how English I was.

In the year 2000, I discovered that I wasn’t alone.  Despite their best efforts, my parents and the Rigbys didn’t get Sally and me together that often.  Jasmine and her mum organised the first re-union but I had to miss it due to a family wedding.  But Sally and I got together that year for the first time since we were 7 and Jasmine and I met in London.  I also Googled the Fanling website and found a whole bunch of American adoptees from Hong Kong.  Kim R, who runs the site, put me in touch with Debbie C who has been very active in organising UK reunions.  I met Sue J at the Birmingham one, ironically, since we both live near each other, then we met up again in London.  Julia Feast launched the adoption study which brought even more of us together.  Imagine the joy of meeting some of the other babies in the Heathrow picture.

It’s extraordinary to meet others who have been through the same experience.  We have an uncanny bond.  It’s a novelty to share anecdotes and we can giggle at those weird conversations I’ve quoted because we’ve all had them.  I’ve met about 50 of us now – and we’re like a family.  Some of us have tried to be Chinese and some of us haven’t.  Some of us flew into a tailspin trying to complete the recent census forms – anything that puts us into boxes is a nightmare because we just don’t fit anywhere.  Then Lucy Sheen came to the rescue.  Her advice:  Tick “Other”, insert “British Chinese”.

So here I am, Claire Ling Chi Martin, British Chinese and 50 shades of yellow.