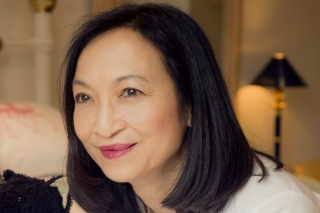 I first must apologise to those who have heard me giving this talk. Not once but twice so please feel free to talk amongst yourselves.

My name is Jasmine Gillies and I currently live in North London with my daughter.

I was adopted at the age of 3 into a multinational family where my mother was English Caucasian and my father Kenyan Asian.

My parents had four children of their own. They also fostered children so we were always surrounded by little ones from all walks of life. Interspersed with foster children from different nationalities joining the family table throughout my childhood. We were a living, breathing multi racial family in the 1960s where it was very unusual to find such a variety of colours and backgrounds under one roof.

I was accepted into the family unit from day one and there was never a hint or sign of being different from the other children, from my skin or the country I came from.  Our family were brought up to look beyond our race and where we were born and to embrace it. I was told from the start I was adopted and it was agreed with all the family members to welcome a child from overseas into the family fold.

Throughout my early days we saw different children coming and going.  They were always included and part of our life.  Some stayed for years while others just a few weeks.  Our family life was very relaxed.  A mixture of Bohemian and hippie style.  An open house where the front door was always open.  We lived in a large house over 2 fields.  Children who stayed were always surprised and amazed how child friendly the place was.  Drawing on the walls or expressing oneself was to be encouraged.  We did have some strict rules such as bedtime routine.  Any music was always allowed as long as it was classical.  Poetry was a weekly ritual that had to be memorised.  Many a time I can remember standing at the back door with my brothers and sisters going over verses to recite.

I had a very happy childhood free from prejudices and racial abuse. Being one of many children, ranging different shades of colour, we felt comfortable and proud to be different and accepted different cultures with open arms.   Our parents guiding us to follow their steps in being forward thinking and a free spirit. Words such as adoption, fostering, colour, and race were such everyday words, said with a fondness and familiarity.

As children we moved around the country due to my parents jobs as writers. We were brought up to embrace our family values and to treat people equally.  I believe that as children we supported each other in an unspoken way as we moved in society free from any stigma there may have been present.

Over the years I can see I led an exceptional journey in a family that were very modern thinking in their beliefs of multi nationalities coming together from all parts of the world.  My father later on became involved in the Overseas Development and UNICEF of which he received an MBE for his contribution.  My mother wrote a number of books including one called Adoption and the Coloured Child in 1967.  This gave us a strong value of mixed cultures.

It has undoubtedly helped me to feel at ease and happy in my skin and proud of the journey I have made to be here from an early age. I have not felt uncomfortable in talking about being adopted or being a different nationality to those around me. I also feel extremely lucky to have had a happy and carefree life being part of a family that I consider as “my family” and not needing to question any more than that.

I did make a conscious decision in wanting a small family and a strong desire to adopt.  I am truly blessed with my adopted daughter Isabella who is here with me now.  She is a wonderful person who exceeded all my dreams in a daughter.  Due to a house full of children back at home when I was young. We children would have liked to have had more individual time with our parents.  This was challenging having so many around, but I do believe our parents gave us equally the same love from the one pot.

My mother has always been very open about where I came from and that I was part of a project to help homeless babies/children overseas. Also what my life would have been in the Children’s home and before.  She was also very willing in helping me find out more information if I wanted to at any stage in my life. My sense of belonging and loyalties has always been to those who I was brought up with and I have taken their values and ethos as my own. I personally not felt the need to learn more of my background in Hong Kong though fully understand and support those who do.

Whilst talking to my mother about my childhood in Hong Kong before I joined the family that we wondered what the other girls who were also brought to the UK were doing. My mother suggested that it would be a wonderful idea to organise a gathering and bring as many of these girls together as was possible. In the early days of our arrived in the UK there had been a number of gatherings which was organised by Barnardos of which we attended a few but dwindled out over the years. Anyway we sent out some press fliers with my story inviting girls to come forward and were amazed with the response and their own experiences. Of the 24 girls who approached me 18 were able to attend while the others I met individually or corresponded with.

I was also able to invite other people who were involved in the project including a couple whose uncle was the governor of one of the Children’s homes in Hong Kong. St Christopher’s where I came from with some of the girls. Mr. Osborne had been bequeathed many photos of the children at the home in the 60’s and was able to bring them along to the gathering which was held at St Thomas’s hospital in London on Saturday, 7th October 2000. Not all girls were adopted through the International Social Services Hong Kong Project; some were adopted directly from Hong Kong.

It was an extraordinary day since some of these girls had never met yet shared the same beginnings.

Since then some of the girls have met and formed groups and gatherings of their own.  As the momentum took speed more girls came forward from all over the world and took a life of its own with a website being formed called www.hkadopteesnetwork.com/uk/  in 2012.

The British Adoption and Fostering Association (BAAF) also took a tremendous interest and underwent a huge study of our group which span over 50 years.  Their findings have now been published this year in January 2013 called “Adversity, adoption and afterwards”. Something we are all very proud to be part of.

My memories of growing up were of fun, surrounded by noisy children and open space.  My parent’s unconditional love and open arms have provided me with the tools I have now of which I try to bestow on my daughter. My philosophy is to be always open and honest.  Have a willingness to explore and speak but always show your love and respect others.