Read out by Debbie Cook 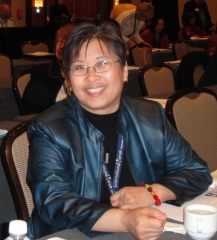 I am one of the 72 HK adoptees who was part of the BAAF survey yet when I was younger immigrated to Canada with my adopted family from Kent. I just recently received the book after ordering online, and within a couple days it was in my hands. I actually bought two, one to give to my parents as I thought they would be interested in reading it.

I came over to England in December 1965 and I believe there was reference to our arrival as I recognized my name “moon goddess” (pg. 19) though; there could be others that were also named that. (I perhaps wasn’t as unique as I thought). In fact, after reading through the experiences of other adoptees, I had quite a bit of similarity of feelings growing up in an inter-racial/inter-cultural family that was expressed by many in the survey results. I was surprised to see that there was a lot of information from the Social Services, which I thought was not available.

In the 90s I had the opportunity to visit and walk through the Fanling Babies Home and at that time I reached out to Mei in California that was my first introduction to another HK adoptee. What a thrill to meet another.

Since then I have been actively involved with Internet communications through Debbie and was fortunate to meet up with her and some American adoptees in Washington. I haven’t ventured back to England yet for a reunion, but am looking forward to doing so. I will be going to the San Francisco meeting to meet up with the ladies in the States and of course meet up with Debbie and some UK adoptees. This is all so exciting and I look forward to meeting my long-life sisters!

Growing up in Canada was probably very typical of early England. I stood out like a green thumb amongst a very Anglo-Saxon Caucasian neighbourhood. Life is much more different now, more multi-cultural, but in the 70s, 80s being a non-white adoptee brought lots of opportunities for people’s prejudice, especially among other young children in the school system. Growing up my thoughts of not “belonging” was more enhanced especially when I was around other Chinese. I wasn’t “Chinese-enough” for them, and yet I wasn’t white. I spent many of my years embracing the Chinese lifestyle, and even made several attempts to learn the language (failed miserably), and yet, I think it is a struggle I at some point will have to just accept.

Having these reunions, I think is a great opportunity to “belong” to a group who understands or at least tries to understand where we are coming from. I hope one day to get a group of HK adoptees here in Canada together. To date I have been in contact with Barb in Calgary, but other than that, I know no others. For now, I’ll keep piggybacking on the UK and States reunions and get to know you all one by one. I look forward to our gathering in San Francisco and the frequent Skype chats. Hope you guys have a great time reuniting this weekend!